Atheist Women on the Radio 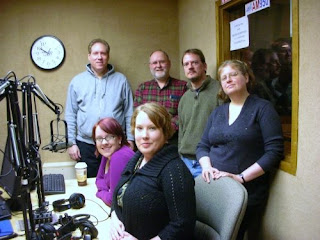 A change is in the air. Minnesota Atheists, the largest and most active atheist organization in the state, as been led by at least one founding member of the board since its creation in 1991. This year, that will not be the case. Jeannette will be serving as associate president, and I will be serving as president.

What does this mean for an organization of nearly 400 supporters? Well, the same activities and programs will continue, but a greater focus on community building, including activities for families and charitable works will inspire a greater number of people to participate.

To highlight these changes, Jeannette was featured on the radio with new board member Crystal. You can download the podcast here.
Posted by Bjorn Watland at 6:06 AM 1 comment:

Dan Barker v. Dinesh D'Souza "Can We Be Good Without God?" Debate

On January 29th, with temperatures many degrees below freezing, an estimated 1,300 students and guests filled a lecture hall to hear a debate between Dan Barker, author, former minister, and co-president of the Freedom From Religion Foundation and Dinesh D'Souza, author, public policy maker, and Christian. The topic: "Can we be good without God?" Campus Atheists, Skeptics and Humanists joined together with Campus Crusade for Christ at the U of MN and Intervarsity Christian Fellowship to host the event.

Mr. Barker, arguing the affirmative, began by thanking a number of people who did not profess a belief in God, yet performed great humanitarian acts, such as Elizabeth Cady Stanton, Edward Gordon and Clara Barton, founder of the American Red Cross whose organization helps those in need regardless of their belief or lack of belief. Clearly, this shows that one can be good, even extraordinarily good, without a belief in a god.

Mr. Barker then quotes from the bible, Psalm 14:1, "The fool hath said in his heart, There is no God. They are corrupt, they have done abominable works, there is none that doeth good." "The bible is wrong," exclaimed Mr. Barker. He continues to quote Thomas Jefferson, "If we did a good act merely from love of God and a belief that it is pleasing to Him, whence arises the morality of the Atheist? ...Their virtue, then, must have had some other foundation than the love of God." Mr. Barker explains, "Thomas Jefferson thought that the urge to do good was an instinct, which is not far from where biology is now taking us by revealing the genetic purpose of altruism." When we hear of a horrible act, such as someone killing their family, we will refer to it as, "an inhumane thing to do." To do good, must therefor, be a part of what it is to be human.

How does Mr. Barker define goodness? "When a person acts with the intentions of minimizing harm in the world."

The best action to take is decided upon by analysis of the situation and requires thought, not blind obedience. If you are only acting in a certain manner because you wish to have a reward in the afterlife, you are acting for selfish reasons. Mr. Barker ends his opening statement by exclaiming that everyone in the audience was "smarter person than the God of the bible, and better people than Jesus ever was."

How are we, as Americans taking virtues for granted? Mr. D'Souza follows us through the development of Western Civilization, explaining how the uniquely Christian virtues of compassion, preservation of life, and the abolition of slavery changed the world we live in today.

Mr. D'souza claims that if we are to look to the other parts of the world for our virtues, such as the abolition of slavery, compassion, the equality of women, science as an autonomous enterprise, they are not to be found until the introduction of Christianity. Compassion to Aristotle was "a vice" according to Mr. D'Souza. Christianity was the force behind the abolition of slavery in Europe in the 4th and 10th centuries, and Quakers and Evangelical Christians were responsible for ending slavery in the United States. The concept of Universal Brotherhood is unique to Christianity and serves as the foundation of the rule that, "no man has a right to rule another without consent," and is also the foundation of democracy. No historian will argue that Western Civilization was built upon two pillars, Rome and Jerusalem.

He ends is opening statement by stating that if we are to look at the products of a secular morality, we should not look to countries like Sweden and France, but rather look at the regimes of Pol Pot, Hitler, Stalin, and Castro. "Atheism is responsible for the mass murders of history." Mr. D'Souza explains that though Christianity may have been responsible for the Spanish Inquisition, which only resulted in 2,000 deaths, and the witch trials, with resulted in only a few hundred deaths, atheism was responsible for the deaths of 100 million people just in the 20th century.

Religion transmits morality, not philosophy, Mr. D'Souza explains. "We can be good without God, but we won't know why," he ends his opening.

Through cross examination and rebuttals, Mr. Barker and Mr. D'Souza focused on the claims made in each opening.

Mr. Barker focused on his opponents claim that the virtues which are unique to Western Civilization can be found in the bible, such as Universal Brotherhood, the sanctity of life, and equality for women. He also was critical of Mr. D'Souza's treatment of the term "law" as it refers to physical laws of nature. He explained the difference between prescriptive laws, which would be the kind a society would create and descriptive laws which are explanations of the results of experimentation.

Mr. D'Souza responded to the opening of Mr. Barker with, "Humans occupy two domains, the way things are, and the way things ought to be. Darwinian logic is selfish, the power to do good rejects the inner voice. An internal voice, “the whisper of God,” is not natural, and speaks against the Darwinian voice." He also was uncertain of the explanation provided by Mr. Barker on the concept of "laws." He asserted that we are still taking science on faith when we assume that the speed of light is the same here as it is on a planet 5 million light years away.

Closing statements by Mr. D'Souza included the assertion that radical Christianity's treatment of the bible is the same way atheists treat the bible. To take the bible literally is wrong. It was written by many people over many years. "What is the motive for unbelief? The main motive for rejecting God is, 'If God is not, everything is permitted.' With God, we can have a more moral life."

Mr. Barker ends his argument by reminding the audience that he has lived his life as a minister and as an atheist. "My life has an atheist has been more fulfilling by far." If Christianity is the standard for morality, then why are there no universal agreements on moral issues? "We need to divorce ourselves from the childish morality of the bible."

Posted by Bjorn Watland at 6:15 PM No comments: