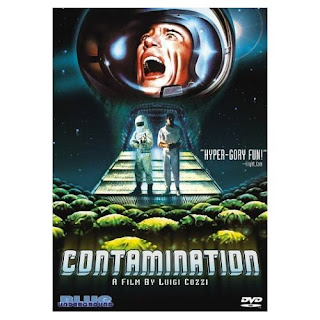 Best Quote: Hubbard: [after slapping Col. Stella Holmes] This is just so we understand each other.

Why You Should Never Watch This Movie: While the 80's may have had it's moments, this movie will make you wish you never lived through it. Despite the lead female character's rank as a colonel, she runs around like a helpless woman while the lead male, Lutinent Tony Aris, acts like an arrogant, cocky male throughout. While that may be distracting, you'll be more distracted by the poor blood-splattering special effects and poor costumes of the investigation teams who are assigned to examine a biological agent which has killed a crew. The team climbs on board wearing painter's masks and open face suits which don't seal at the hands, wearing fabric mittens and exposed bottoms (you can see the actor's jeans!). I know it was the 80's, but that's just stupid.

If the Cyclops doesn't get you, the eye liner will.

On Friday, August 7, 300 atheists descended onto the Creation Museum in Petersberg, Kentucky. The Creation Museum, an Answers in Genesis project, is designed as a more traditional science museum than some carnival ride (as other "creation museums" have been). It presents evidence to support their pre-drawn conclusion that all that has ever happened in the past is contained in the Christian Bible. Since the Christian Bible contains lineages and ages of people, they conclude that that scientists who have used material evidence to come to the conclusion that the Earth is about 4.5 billion years old must be mistaken about atheism.

Why were 300 atheists going to such a place? "To mock them," responds PZ Myers, evolutionary biology professor at the University of Minnesota, Morris. The goal was to fully understand what arguments were being made to support Creationism and fully expose such arguments as circular or based on poor reasoning. Dr. Myers made light of the event by riding a fiberglass dinosaur which featured a saddle. What started off as a fun event would shortly turn into a serious conference of about 100 attendees at Ohio State University in Columbus.

While the tone of the Creation Museum trip was full of mockery, the conference itself featured a strong theme of cooperation. For example, Jesse Galef, Communications Associate for the Secular Coalition for America, gave an inspiring presentation about how to reach out to your elected officials. Should atheists look for non atheist allies when lobbying? "It can certainly help get attention - showing that it's not just atheists who support the side," Galef responds. Sean Faircloth, Executive Director of the SCA, later spoke about the importance of reaching out to non-atheists and getting them behind our causes. "We need to get the soccer moms and Joe Six-Packs of the world to care about our issues, Faircloth said." One way to do that is to show clear harm. In many states and counties, religious organizations are exempt from health and safety regulations. This has resulted in the needless deaths of children from dangerous day care facilities and staff. It is absurd to replace government audit and inspection with religious authority.

The next day, Ashley Paramore, the Events Coordinator for Students for Freethought at Ohio State and an SSA board member, spoke about the importance of service projects to an atheist student group. Inspired by Ashley Carter from University of Illinois Atheists, Agnostics and Freethinkers, she organized a service project trip to New Orleans to repair damage done after Hurricane Katrina. What is unique about Ms. Paramore's project is that at the start she coordinated with the Thomas Society, a campus Christian group. There were several benefits to working with another organization: First, the Thomas Society had organized service projects in the past, were familiar with transportation, group insurance, feeding people, etc. Second, she was able to spend more time getting volunteers since she wasn't planning everything. Lastly, one of the goals of a service project is to break down the stereotype that atheists don't volunteer. By working with a religious group, Paramore’s group not only made that case, but they get a lot of time to dialog with people to break down stereotypes on both sides.

PZ Myers presented his keynote address, "Counting Coup," on Saturday night. While many may recognize him for his unapologetic bashing of the religious (this is the focus of his talk, his skill is to get people to pay attention by whacking them with colorful words), even he sees himself as part of a larger movement. He knowingly ignores diplomacy, choosing instead to cause reactions that will cause some to think differently than they had. After the talk, an audience member asked, "When is diplomacy okay?" "Diplomacy is always okay," Dr. Myers responded. He thanked the efforts of people like Sean Faircloth who are able to speak more kindly to others.

I would recommend supporting the efforts of the Secular Student Alliance and our local alliance member, the Campus Atheists, Skeptics and Humanists at the University of Minnesota. You can visit their sites at www.secularstudents.org and www.cashumn.org.

Posted by Bjorn Watland at 6:09 AM No comments: