How to get a geek into the woods, or Geocaching 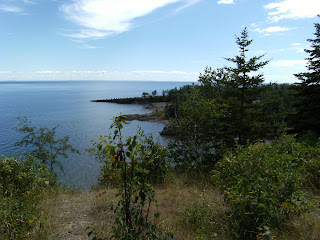 Last year, after our wedding, we hauled ourselves up to Duluth to get away for a day or two. On our jaunt, I wanted pie and had heard of Betty's Pies, which is on the way to Two Harbors. So, we get pie, but have time to kill, so we stumble into Gooseberry Falls State Park. At the visitors center, there are displays of stuffed animals in the area, birch canoes, etc. But, there are also brightly colored signs advertising Geocaching at the State Parks (sponsored by Best Buy.)

We wander over to the info desk, check out a Garmin eTrex GPS, received a sheet with instructions for the GPS and headed out of the door.

We did get lost, but wandering around a state park isn't boring, even if you are lost. We eventually followed the right path to lead us to the "cache." We hiked on well established trails to an outhouse which overlooked Lake Superior. It was a great view and something we wouldn't have found on our own.

We were hooked. When we came back home, I plugged in coordinates to a few caches in Como Park and one that was stuck in a train on Energy Park into my car's GPS. We had no luck finding anything and stopped looking. We started up again about a month ago, because our friends, Crystal and Vic, started Geocaching. They were actually finding things like Geocoins, and Travel Bugs. It sounded really interesting, so we headed out with the Mio DigiWalker c310x. We didn't find anything.

We found a Garmin eTrex Venture HC for about $85 refurbished to up our game a bit. Still, the caches we tried to find were elusive. It looks like the Como area is more difficult then we would like and was probably a bad place to start out.

Since then, we have crawled over Central Park and Villa Park in Roseville, Crosby Park in Saint Paul and Lake Harriet in Minneapolis. We have left a bunch of Travel Bugs we purchased to leave in caches, a handful of geocoins, and some trinkets. It's been fun, even if we've both been soaked, exhaused, muddied, pricked, bit and frusturated.

For more information on Geocaching, visit www.geocaching.com.
Posted by Bjorn Watland at 9:15 AM 2 comments:

American's who do not believe in any gods (we would call them atheists, although they may not) are a large part of the population. Some polls would say that there are more atheists in America than Mormons and Jews combined, however, we are either underrepresented, or our politicians are lying about their religious beliefs. If nearly one in five of us are atheists, as some polls suggest, why are we treated as a much smaller minority? Much of that has to do with numbers and organization.

Right now, across the country, atheist groups are scrambling to make themselves known to people who had no idea there w
as a group for them. They are doing this through ad campaigns, websites and radio shows. There are some who say that we are recruiting members to a hate group. I would say people are willingly joining a hated group. By being organized, by being a part of a group, whether as a dues paying member, or not, you are helping. The more you participate, the more you make others around you comfortable to be who you are without fear, or shame. We should not be afraid to say that we're going to a spaghetti dinner for Minnesota Atheists on the weekend when a coworker asks us what we have planned.

Don't we live in a tolerant society? After all, we have the separation of church and state to protect atheists and the religious from interference from churches and the government. We should be able to have an event in the public without fear of harassment, but we're not there yet. As atheists, many of us are not interested in debating with the religious about the existence of God, the accuracy of the Bible, or whether Jesus rose from the dead. However, simply by holding a sign with the Minnesota Atheists logo, you open yourself up to harassment.

Jeannette Watland, Associate President for Minnesota Atheists, held a sign at the last Flying Spaghetti Monster spaghetti dinner in Como Park to direct people to where the dinner was being held. She was only out there for 20 minutes, maybe a few hundred cars drove by, but in that time she was called names, yelled at, honked at, told to, "stop proselytizing," and forced into debates with people about the origin of the Universe. Just for holding a sign.

By getting involved, by speaking out and standing out, you are helping to educate the public. We live in a diverse community; however, our existence is hidden. We are your neighbors, coworkers, friends and family. We have morals and deal with the same problems in life as anyone else. One quote Jeannette remembered from her experience was from a mother pushing her child in a stroller. "What's that word mean, mommy?" "Atheist? That's a dirty word." With your help, people will see that it isn't.
Posted by Bjorn Watland at 7:59 AM No comments: